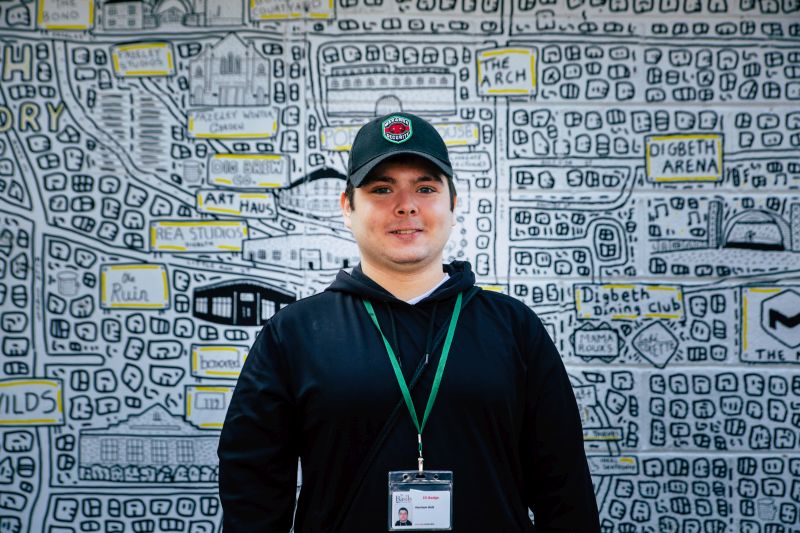 Harrison, 22, who describes himself as a ‘normal working-class boy from Erdington’ has been volunteering with St Basils Street Outreach team since the start of the year. He recently left the team to go to University.

Here he explains his reasons for getting involved, how he has found the role and why he hopes St Basils will recruit more volunteers to replace him.

Q. How and why did you get involved with St Basils street outreach team?

“I was intrigued to do something where there’s actual change being made.”

“I saw and responded to a Facebook post advertising for volunteers. I’d already been involved with a few local soup kitchens as I’m really inspired by communities that stick together and help each other, and as I was only at college, I thought ‘I can do that’. Otherwise I’d only be sat around watching telly!”

Q. What have been the biggest rewards of this role for you?

“When I was helping out at the soup kitchens to feed people, I would know that their appetite would be met for that night, but volunteering with St Basils outreach team, there was a young woman recently who was pregnant, well getting her into appropriate accommodation felt very rewarding, as when you know you’re making a lasting difference to someone, that’s what makes it all worthwhile.”

Q. What have been the biggest challenges of this role for you?

“The biggest challenge initially was not knowing enough about the legislation or being able to pinpoint what support is available in Birmingham. I know things now about rent and benefits, and tenancy law and rights that I never would’ve known before otherwise! But it wasn’t until I started volunteering with the outreach team at St Basils that I started to understand the sheer complexity and enormity of the problem. That’s been the hardest thing.”

Q. What are the main issues of the people you meet on the streets?

“We see a lot of care leavers and nearly every person has a got a mental health problem.”

“You have to ask yourself which was first? Being homeless or the mental health problem or was it a bit of both?

“Drugs can also become a big draw for young people on the streets. Especially Mamba. It’s a big problem.”

Q. Would you say you’ve enjoyed the experience?

“The beauty of this role is just witnessing humanity in its purest form, because when people are just trying to survive, they’ve got no airs and graces, they’re just people. You sometimes hear passers-by making disparaging comments about homeless people on the streets (and it always hurts that bit more when you work with homeless people), so you see the different sides of humanity. You can feel like crying one minute and then you’re laughing the next. If you work in an office it’s all very masked and perfumed and arranged whereas in the outreach team, the role is very much ‘raw’.”

“It can be pretty bad sometimes but it can also be hilarious and heart-warming, and you live for those little interactions. Young people younger than myself coming out with little catch-phrases and little bits of wisdom. People can really surprise you.”

Q. Have you enjoyed working with your colleagues? What’s it like to be part of that team?

“I’ve found it fantastic working with the team. Working with people that you can tell are good for you and you can really learn from. The way they conduct themselves or the approach that they take. It’s been inspirational.”

“It may sound silly but we are properly like the ‘A team’ lol. Everyone’s got their own little skills set.“

“My speciality is food, if someone needs food I know where we can get them some from in the city centre, so that’s the little thing I brought to the table. We’ve also got people that used to work for probation so they know the ins and outs of the criminal justice system, same with mental health, drugs and what agencies to refer to. The team has the inside track due to their specialist knowledge. I’ve learnt a lot and it’s good to know that if you’ve got a problem there’s probably someone in our team who can help!”

Q. Why did you choose to stay a volunteer and not apply for any of the new staff roles?

“This sector isn’t my eventual goal or plan. I’m off to study bio-medical science at University and eventually I hope to work abroad for Doctors without borders. Also actually remaining a volunteer has helped us more with some people. I turn up in a baseball cap and a tracksuit and it is a tactical decision as well as being comfortable. Young people don’t put their guard up so much with someone who is clearly not a professional. It helps break down that barrier. I think that’s why it’d be really important for another volunteer to join the team in that same informal position.

Q. Do you feel volunteering has given you any new skills and would you recommend it to other people? 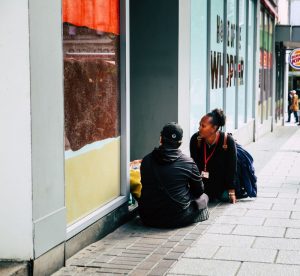 “I’ve learnt a lot about my own capabilities and I’ve done things I’ve never done before, like official phone calls and official emails. There’s skills you don’t realise you have”.

“I’ve got a lot out of it just for the amount of personal growth. What I’ve learnt about myself and the world. It puts your own ‘problems’ into perspective.

“I’ll soon be a skint student and no doubt they’ll be nights that I won’t be able to afford to go out drinking with my mates, but that’s not real poverty.

Q. What advice would you give someone volunteering with the outreach team in the future?

“I also think it’s really important to look them in the eyes and be genuine and caring but honest. A lot of them are angry at first and don’t trust us because of people who have gone before over-promising and under-delivering. My policy is always to be honest and focus on the things we can do”.

“It’s important not just to focus on issues as well. Cheering someone up and having a laugh and a joke with them, can make someone’s day, especially if they’re rough sleeping. It makes them feel human again”.

“And once you break down the barriers you can do so much good work”.

The outreach team leader said of Harrison “Harrison was there from the early days when we were a really small team and really in need of that extra support. You could always count on him and he wasn’t doing it to get anything out of it, he was just doing it because he wanted to have that sense of helping. He did some great work and because of his age and the way he was with the young people, he built some really good relationships. So it’s a shame for us but obviously he’s now moved onto pastures new and we wish him all the best.

We’re in the process of trying to recruit some more volunteers and as well as trying to get some who are really passionate about helping people we’re hoping for some who can actually relate because they’ve been in similar situations; rough sleeping or had a mental health problem or a drug dependency, and have come through the other side of it.”

To find out more about the work of the Street Outreach team please read interview with the team leader here.

Would you like to Volunteer with the Outreach team or find out more?

If you would like to apply to volunteer with this team please see the Volunteering section of our website.

Donors to St Basils can also go on a ‘walk about’ with this team to understand more about their work. To arrange this please contact the Outreach team via outreach@stbasils.org.uk or for Businesses looking to or currently working in partnership with St Basils, Fundraising Executive Sian Dhillon via fundraising@stbasils.org.uk.