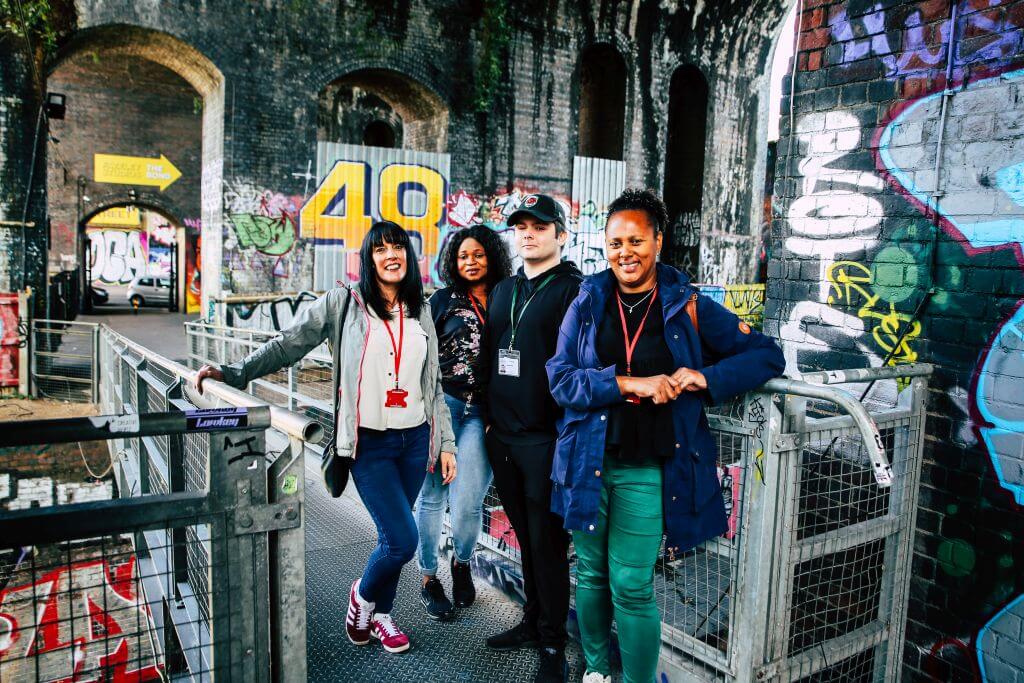 St Basils outreach service has been live for just over a year. Here the team leader looks back on the first year of the service, explaining what some of the unexpected challenges have been and how the team are now working to combat these.

Q. When did the outreach service launch?

“St Basils Outreach service went live on 1st October last year, which is also St Basils birthday, launching with the name ‘Young People’s Navigation Service’. “Up until then St Basils didn’t have any sort of outreach service” explains the team leader  “but we came to realise there were groups of young people out on the streets that could’ve accessed help but wouldn’t come down to see us at the Youth Hub in Digbeth. We didn’t know whether that was because of issues such as lack of trust in services or if they just didn’t quite understand where to go, so when we found out about this funding, we leapt at the chance to take our Youth hub offer out to those on the street across Birmingham”.

Q. What does the Outreach team do?

“At first the team was made up of 2 outreach navigators, funded through Birmingham City Council and Birmingham Children’s Trust, as part of the government’s rough sleeper’s initiative. The idea was that they would pick up young people on the streets, get them into temporary accommodation, support them to claim benefits, help them get their ID and open a bank account, link them in with any local services, then step away.

We have been able to do that with young people who don’t have any support needs and can manage a tenancy on their own. There are also some young people that we meet on the streets who are quite happy to come to the Youth Hub but just didn’t know about us, so then it’s just a case of bringing them down to the Youth Hub, introducing them to staff and explaining what’s going to happen as it is quite a long process. We’ll make sure they’ve got a drink, perhaps accompany them to get their ID but otherwise we can hand them over to Youth Hub staff and step away, but these are the minority.

However the outreach navigators have found a lot of young people have additional needs and have also supported them to register with the health Xchange for medical conditions, Forward Thinking Birmingham for mental health support and Change Grow Live or Aquarius to tackle drug and alcohol dependencies. They have also navigated them to local night shelters at the Salvation Army and Washington Court or into cold weather provision when that comes into play.

Where we do struggle though is with the lack of emergency complex needs accommodation for young people. A lot of the hostel provision is over 21s only and it’s just not the right environment for 18 year olds. There are a few bed spaces but not enough to meet demand currently”.

Q. The outreach team has received more funding recently so what were the challenges you encountered in the first year and how have you adapted the service as a result?

“The role has become something much bigger than the original intention. There is often an initial lack of trust, meaning we have to work hard to build relationships with young people so that they will accept our help, and then once that trust is established young people want to stick with that contact, rather than be referred onto someone they don’t know”.

“Even once we’ve got them into accommodation that is only ever the start. The majority of the young people that we meet have never had their own tenancy, they’ve never had to pay a bill or go food shopping, probably never lived anywhere on their own. Getting them in accommodation is in many respects the easy part. It’s supporting them to stay. A lot of the work we do with them is trying to get them into meaningful activities to stay in accommodation. While they’ve been bedding down in the city centre their support networks, free food and doctors are all in the city centre too. Whereas the accommodation offered is out in the suburbs, so then our work is linking them in with support in their new local community, so that they’re not gravitating back towards the city centre. That’s the hardest part.”

“Our Outreach Navigators do support them much longer than anticipated, so they don’t end up back on the streets right where they started.”

“I think we all under-estimated the amount of support that would be needed”.

“The role and the needs of the young people is much more complicated than first thought, we have had to develop more specialist outreach roles”.

Q. So what is the make-up of the team now?

“St Basils outreach team is now made up of;

The last two roles were recruited in the last few months bringing the total in the team to seven. The outreach team did also have a young volunteer called Harrison who has left recently. (Read Harrison’s interview here). The Outreach team are in the process of recruiting more volunteers.

Q. Tell us more about your partnership with other local agencies

“We work in a multi-agency approach with other agencies such as Trident’s rough sleeper’s team, Shelter, CGL and the Health Xchange. We meet every morning and do handovers and tasking and we do joint outreach as well. We’ve got a WhatsApp group so we all know what’s going on with each person we’re aware of is on the streets. There is a lead for each person too so if it was a young person under 25 we at St Basils would be the lead but we all work with that person too, drawing on the different expertise and the resources of each organisation”.

“We had one young man recently who didn’t feel ready to go back into a hostel as he’d had some problems in the past, but he was sick, he’d refused to see a doctor previously but this time we got him in and he got some medication. We didn’t want him to give it away to other people or risk him having the whole lot so we kept it, and between us and the rough sleepers team, went out every few hours and gave him some water to make sure he didn’t become dehydrated and some tablets. We coordinated this via the WhatsApp group and he’s fine now”.

Q. Are there any other recent developments in the service?

“We’ve started doing evening outreach as well now. At the moment we’re trialling it and doing one evening a week. We go out into the city centre from 6-10pm.”

“It’s a completely different scene to what we see in the day. When you go out in the evening you get a much better picture of who is actually homeless, plus we tend to get a very different response, they’re much more interested in talking and much more receptive to what we’re offering and we have much more meaningful conversations”.

Q. How many people have you helped? 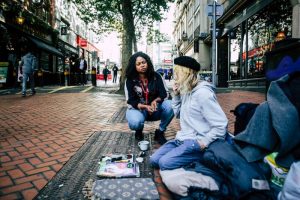 “We’ve got some statistics for the first year but we were a very small team at the beginning plus we took a lot of phone calls from concerned members of the public and went in search of each young person at least 3 times, covering quite a large area, but they had either moved on or had a home to go to.”

“The total we had for the first year that was young people we actually managed to find was 44. Of those 44, 35 young people aged 16-25 were sleeping rough on the streets, 9 did actually have accommodation but they were rough sleeping instead.”

“Of the 35 who were rough sleeping we’ve accommodated 33 and have supported them to remain in that accommodation.”

“With the remaining two, 1 had no recourse to public funds but thanks to support from SIFA Fireside and Change into Action, we supported him to return to his old job where he did have accommodation.”

“The other one is still rough sleeping because he says he doesn’t feel ready to move into accommodation yet, but we’ve linked him in with our new Rough Sleeper and Homelessness Personal Advisor because we found out he was a Care Leaver and we’ve also got the Leaving Care team from the area he’s from to come and see him. He’s also been accepted for Housing First, a scheme to provide a home first then provide wrap-around support and in the meantime we’ve linked him in with local support services to ensure his physical and mental wellbeing.”

Q. You mentioned a lot of these young people are not actually from Birmingham so do you know why they are coming here?

“We get a lot of people escaping gang violence and that’s why they’ve come to Birmingham, looking for a fresh start, but a lot of the time they come here because they’ve been told there’s accommodation here, and of course there’s support here too”.

Q. What have been the rewards of the role?

“It can feel like a battle sometimes but there are moments where it can be very rewarding too.”

“The lack of trust is such a big challenge that when you do manage to break down that barrier it can feel very rewarding. There was one young man we found out liked strawberry milkshakes so we bought him a strawberry milkshake everyday until eventually he spoke to us but it took a few weeks. These days he’ll talk to us and even come down to the Hub, have a shower and sit in the kitchen at the back and we’ll try and support him with various things. We actually got him to the Health Xchange the other week. That’s taken 3 months, but that was a great step forward with him.”

“And another young man recently said to me; ‘You’re the first to ever actually help me’ and was genuinely really grateful so that was a lovely moment.”

The team are happy to take any St Basils supporters out onto the streets with them on their outreach rounds and talk through some of the issues facing young people and this team. If you are interested in this please email Business and Communities Executive Sian Dhillon via sian.dhillon@stbasils.org.uk who will liaise with St Basils Outreach team to arrange this.

For anyone interested in volunteering with the Outreach team on a more regular basis, you can apply to be a volunteer through our website.

Any other enquiries about this service can be directed to outreach@stbasils.org.uk