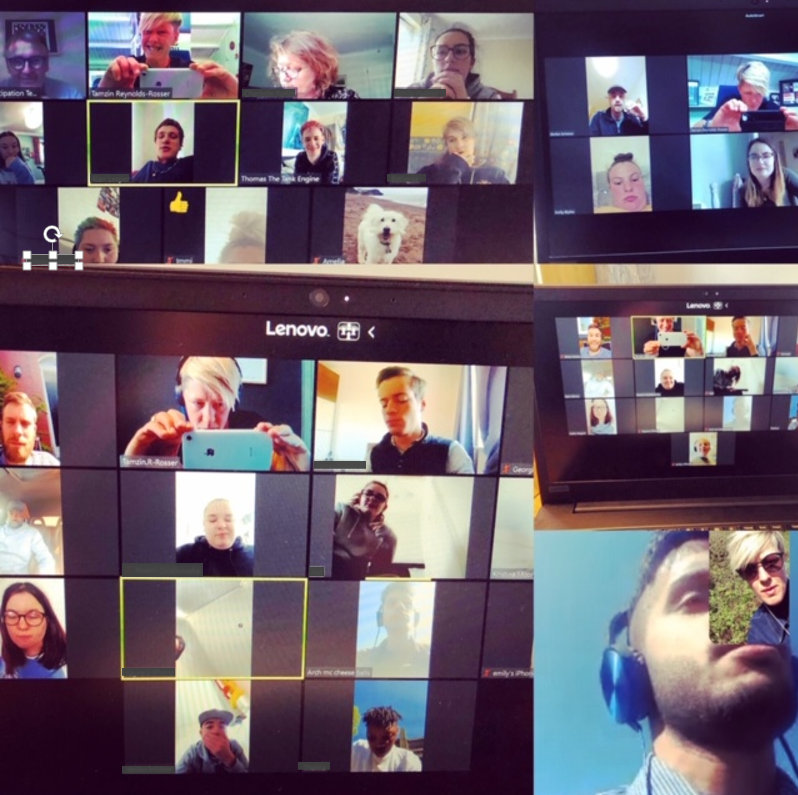 Coronavirus or not, our work continues, so we’ve been catching up with various different teams at St Basils including Youth Voice, to find out what the challenges have been and how they have adapted so that they can continue to support young people in these difficult times.

What have the challenges been?

“Initially there were big challenges both in St Basils and outside as to how we promote keeping young people indoors. We were worried about young people not taking the situation seriously. This was before the strict lockdown when the virus didn’t seem to be affecting young people. Therefore our first activity was to reinforce the message that young people can still spread the virus so we got youth voice members involved by doing ‘stay at home selfies’ and sharing these, using the message, ‘spread the word, not the virus’.

Once young people were in lockdown properly and staying home, it then became apparent that lots of our young people were struggling. One of the problems with the national young people is that because they’re the higher level engagers and more confident and independent, they’re often in their own tenancies and so all on their own. We’ve had ex-young people who were flourishing that have since crumbled. We’ve had young people that were on the verge of leaving or have just left coming back and needing emotional support, familiarity and reassurance. I’ve had young people get in touch who I haven’t heard from in years! It’s what we’ve always known and been about; young people need to feel cared about.”

How have you adapted?

“We work in partnership with an organisation called The Mix. It’s an online digital platform. We’ve got a great relationship as they’re featured quite a few of our young people and their experiences and perspectives. I contacted them and asked if I could share their resources with our young people. They’re very focused on our age group and there’s lot of advice about mental wellbeing and how to cope with this situation so I shared all these resources and others with my young people via our social media and the other channels.

We’ve also been able to support young people with their mental health thanks to a fund from Landaid aimed at helping out during this crisis. We asked the young people what they’d like us to apply for on their behalf. They asked for help with boredom busters and mindfulness apps, because these young people just don’t have the money to buy these. For example we know there’s some brilliant apps for mental health such as Headspace but they’re £50 and the young people we work with don’t have the money for it. We’ve also been able to set up an emergency hardship fund for young people, who have had to face unexpected struggles due to the nature of this crisis.

Quite a lot of the young people have been struggling with buying food as well as they’re used to just shopping as and when and having to put money aside to do a large weekly shop and queue up in an environment that is already a bit daunting was causing lots of anxiety, so we can now help them with a £60 shopping voucher and all the young people have to do is send in their receipts. “

What else has COVID-19 changed for you?

“Since lockdown began we’d been working on activity ideas to do at home and we had loads at the beginning including connecting with young people at a similar project overseas, but that was a lesson learnt for me as no one signed up and when I asked the young people they said ‘we don’t want to connect with people we don’t know when we’re struggling ourselves’, so that just proves what we knew anyway; ‘Always ask the young people first’.

We thought it was a great idea and they’d love to get involved whereas what they actually needed was some support and connection.

So I set up connection sessions and on the advice of Dr Amanda Skeate and the PIE (Psychologically Informed Environments) team, advertised the times young people can contact me. We’ve been working online for years but in a positive way whereas with this situation it has suddenly flipped into crisis management, so having set times has worked really well. It has been great to have the PIE team’s advice on how to adapt in this new situation.”

Have there been any unexpected positives?

“I have been doing weekly group zoom meetings because the young people said they want something to look forward to. As part of this we’ve been doing quizzes! We do this before the consultations and other work and they love it! I did the generation game the other day with 20 objects on the conveyor belt! Since then I’ve asked young people to devise their own quizzes so they’re running them now, I’m not involved.

Work wise we’ve done some consultations on unregulated accommodation, which is a big national consultation. That was the first online consultation we’ve done, and once I managed to get myself off mute it was great! I had the young people literally having to text me, because I couldn’t work out why they couldn’t hear me, so that’s one big positive out of it, the young people are teaching me things! More recently they’ve actually been doing the technical bit and scheduling the meetings and now they invite me!

I also did some recruitment training with our young people in Warwickshire. Their key worker delivered the training to the young people, but I joined on Zoom to talk to the young people at the end, and because that worked so well, I then recruited a group of young people in Devon again with their worker via Zoom. So this whole situation has taught us new skills and new ways of working, and from the feedback I’ve had all the accommodation projects have found ways to adapt and be innovative too. Quite a few of them have set up facebook groups and Youth Voice has one too, which now the rules are established has become a really supportive environment, with young people designing inspirational quotes to share with each other.”

What do the young people say?

“They’ve all been saying they’ve realised how important Youth Voice is to them, and having that connection with other young people like them.”

“I know you’re super modest about all this stuff but thank you so much for making sure we can all still chat and are thought about even though the world has so many problems right now. It’s so lovely to know there’s someone out there doing that for us.”