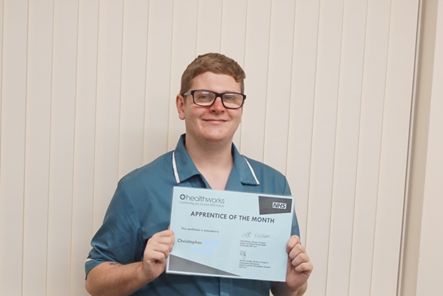 NHS Apprentice Christopher shares his journey through St Basils, from ‘homeless, shy and worried’ to ’employed, confident and happy’ and saving for a place of his own.

When I first came to St Basils I was very nervous and very shy and didn’t know what to expect. I approached the staff members and made them aware of my situation. They dealt with it very efficiently and the time span was very good as they got me into supported accommodation the same day.

I then stayed at that temporary accommodation for roughly 6 months. I didn’t really engage much with the staff members. Eventually they got me doing some of the courses there and it was very good and rewarding, I started to become more confident.

Then I moved on to another supported accommodation which I stayed at for 8 months. The first few months were difficult again but I eventually adjusted to my surroundings and started doing short courses again. I was also made resident rep.  I started doing voluntary work at the Youth Hub where I originally went to when I was first homeless. It helped me massively to develop my skills and confidence.

“The staff helped me every step of the way….this gave me the motivation to continue..”

It was then that I was approached by a member of staff at the Youth Hub who told me about St Basils NHS apprenticeship scheme at Hallam close. It appealed to me straight away because the rent was really low and the support would be there to help me through an apprenticeship and hopefully get a career.  We began the process with me moving into Hallam close near the hospital site. 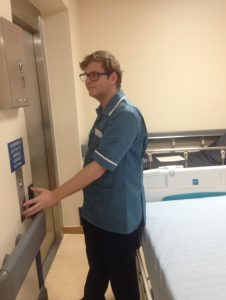 I started my apprenticeship a few days later. I found the first 2-3 months possibly the hardest of my life. It took me so much to get used to a new setting and a new job I knew nothing about. The staff helped me through every step of the way, supporting me with learning good independent skills, discussions around my moving-on options and saving towards my own flat.

All of this gave me the motivation to continue, to push through the hard times and eventually, I needed their help less over time but knew they were there for advice if I still needed it. My confidence, skills and knowledge continued to grow and I was becoming better at my job role as a health care assistant. I was made resident rep and made aware of how well I was doing.

It was a rewarding feeling as I started off shy and worried but now I’m confident and happy. This scheme has help me massively and I don’t look back with any regret at joining this project. Without Hallam I would not be in the position I am today.

I have now reached the point where I am a qualified Healthcare Assistant Band 2 and was also nominated for Employee of the Month and was successful. I received a certificate for this.

Also I am doing Bank Cover shifts so I can earn more money save towards getting my own flat and hopefully in the future buy my own property.