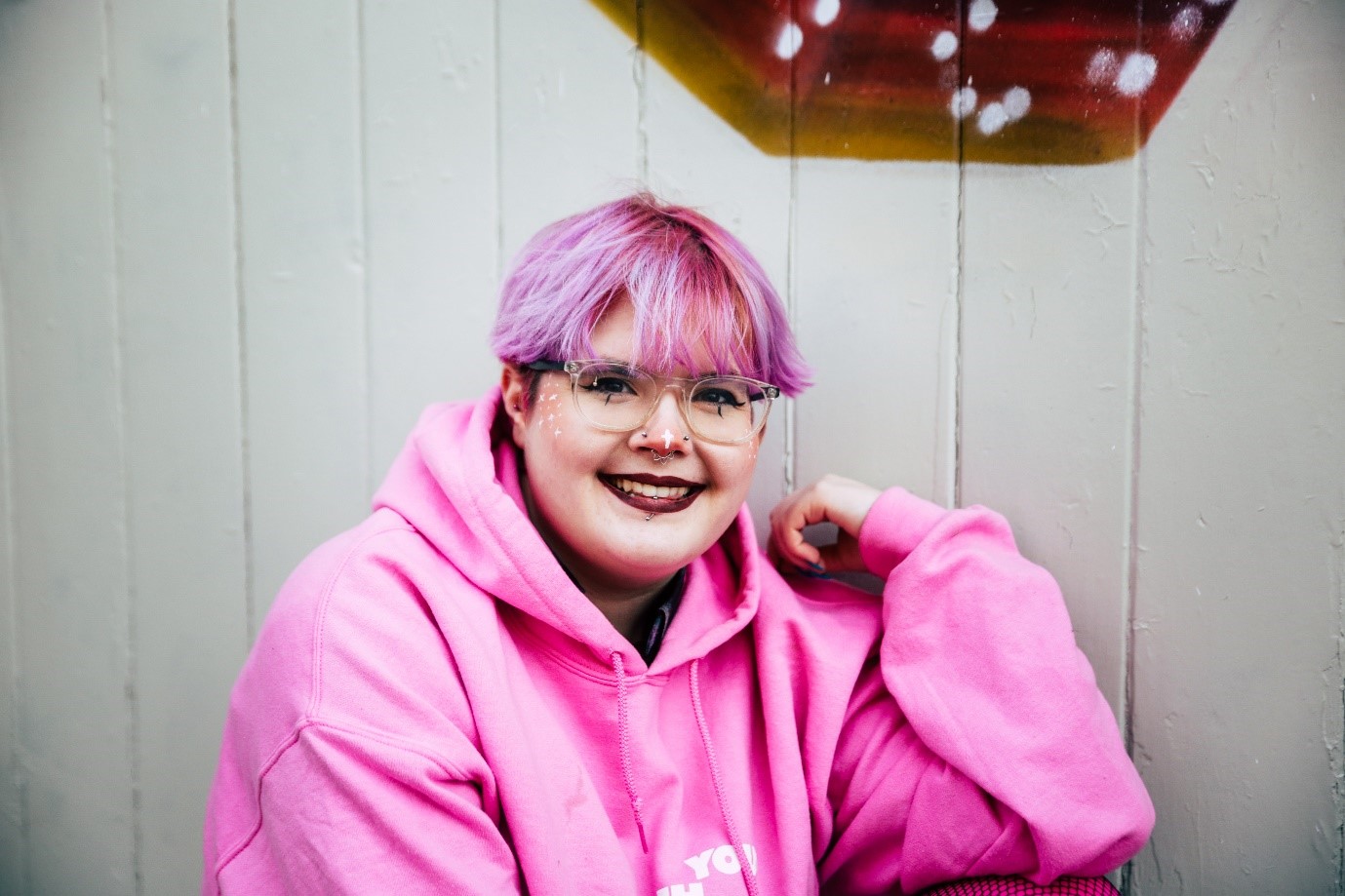 This Pride month, we spoke to one of our young people and a Youth Advisory Board member, Antler Bowers, about the needs of young LGBTQ+ people accessing homelessness and support services.

Antler is part of the St Basils EDI (Equality, Diversity and Inclusion) Group, and has spoken at the National Youth Homeless Parliament sharing lived experiences and offering national recommendations on inclusion of young people that identify as LGBTQ+.

“As a trans person, I love educating people on LGBTQ+ issues (though that’s just me- not all trans people are comfortable with this!). Specifically, I feel like there is a lack of information and education out there on trans issues, especially when it comes to those who identify as nonbinary – having a gender identity that is not simply male or female. I found it difficult navigating the world as a young nonbinary person faced with homelessness.

For example, with the use of pronouns- it made me feel like the world wasn’t “for me”, yet, when people got my pronouns wrong. I totally understand that sometimes it can be difficult, and many people do not do this out of disrespect, however the end result in how I felt stayed the same- it increased my discomfort and dysphoria. The training of staff didn’t seem up to date when I used many different support services, and some things were outdated, for example, the use of the term “transexual” instead of transgender, and binary gender options on forms. I’ve also had negative experiences in the past with particular services, such as being deadnamed, misgendered and even harassed. Mostly though, I felt misunderstood.”

As noticed by Antler, in a report by AKT UK, nearly one fifth (19 per cent) of organisations do not reference LGBTQ+ homelessness or LGBTQ+ youth homelessness in any of their policies, procedures, and strategies and 18% were not aware. This is something Antler is passionate about helping St Basils do within their communications with young people. Interviewees in the report highlighted gaps in staff knowledge of LGBTQ+ homelessness and LGBTQ+ identities as obstacles to delivering consistent inclusive services.

Antler continued, “I feel young people are starting to understand these issues more due to references and nonbinary people in popular culture such as Sam Smith, Demi Lovato, and TV Shows such as Sex Education. It does help, but it comes down to organisational structures listening to their young LGBTQ+ service users which would result in positive change. This is a really important thing to manage- the stats show that we are more likely to experience homelessness.”

As per information via the AKT, coming out, or being outed as LGBTQ+, can lead to young people being made homeless. 24% of homeless young people identify as LGBTQ+.
Once homeless, LGBTQ+ young people are more likely to face violence and discrimination than young people who aren’t LGBTQ+. They’re also more likely to develop substance misuse issues and experience sexual exploitation. This can all take a huge toll on someone’s physical and mental health.

Antler added “It’s really important to respect people’s LGBTQ+ identities when they are accessing services- I was lucky, I have been supported amazingly by my parents and community, however many others do not have that luxury. When we are seeing LGBTQ+ youth at these services, we need to respect their boundaries, sexual orientations and gender identities, as this can be life changing and life saving in some cases. When accessing a service, this may even be the first time that they are accepted as who they are if they have had family or societal issues. If young homeless LGBTQ people are loved and accepted from the get-go, the chances of them thriving are much, much better.

I am so happy that I get to sit on the Youth Advisory Board at St Basils and help to educate the staff on these matters. If you are a LGBTQ+ young person experiencing homelessness, risk of homelessness, or any other issues, I would advise you seek help at the links below- there is always help out there.”

Or for help for LGBTQ+ youth elsewhere in the UK, or for more information on LGBTQ+ youth homelessness, you can visit AKT:
https://www.akt.org.uk/
020 7831 6562